The green card, which recently turned green again, has a history of a multitude of names and colors. The transformation over time into a critical piece of photo identification reflects the scarcity of US residence. The security features are proof that numerous counterfeiters will stop at nothing to duplicate them. Indeed, the history of the green card is very colorful.

The U.S. Citizenship and Immigration Services (USCIS) officially designate the Green Card as a Permanent Resident Card. However, over time it has also been referred to as the Resident Alien Card or Alien Registration Receipt Card. Internally, USCIS designates it as Form I-551. You will see fine print in the corner of your newer cards.

It wasn't until 1940 that foreigners even had to register in the USA. Under the Alien Registration Act of 1940, all foreigners (non-US citizens) in the United States are required to register with the federal government at post offices. The registration forms were forwarded to the Immigration and Naturalization Service (INS) for processing and a receipt card (Form AR-3) was sent to each registrant as evidence of compliance with the law. The law made no distinction between legal and illegal foreigners. All aliens had to register and all received AR-3 documents. 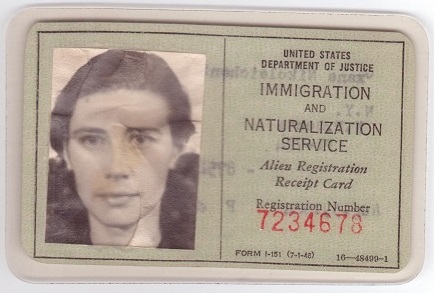 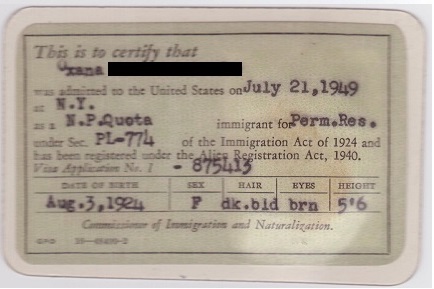 The first green card came into being shortly after the Second World War. Congress passed the Alien Registration Act of 1940, which requires foreign-born individuals 14 years and older to report to a U.S. post office in order to obtain a fingerprint and register their presence in the United States. As immigrants began to pour over the US borders, registration of aliens was no longer done at post offices and became part of regular immigration procedures at ports of entry and immigration offices. Immigrants with no legal basis to stay in the United States had to leave the country or were removed. Persons with a valid right to permanent residence received documents proving their status. INS began issuing various documents based on the alien's authorization status to replace the receipt cards. For example, visitors were given an I-94c, foreign temporary workers an I-100a, and lawful permanent residents (LPRs) an I-151. The light green Form I-151 became the coveted proof that the holder was entitled to live and work in the United States indefinitely

The Homeland Security Act of 1950 added the value of Form I-151, Alien Registration Receipt Card. Effective April 17, 1951, aliens with AR-3 cards could replace them with a new Form I-151. However, only those with legal status can replace their AR-3. In addition, foreigners who were unable to prove their legal admission to the United States were prosecuted for violating US immigration laws.

As a result, the Form I-151 card was a security for the holder. It indicated the right to live and work permanently in the United States and promptly notified that right to law enforcement officers. Due to the awkward official name of the card – Alien Registration Receipt Card – immigrants, lawyers and INS staff named it by its color and called it the “green card”.

With the desire to emigrate to the USA, the value of the green card also grew. In the 1950s, INS was faced with the problem of counterfeit green cards. To combat document fraud, the INS issued 17 different redesigns of the card between 1952 and 1977. Counterfeit cards have been a problem throughout the history of the green card. 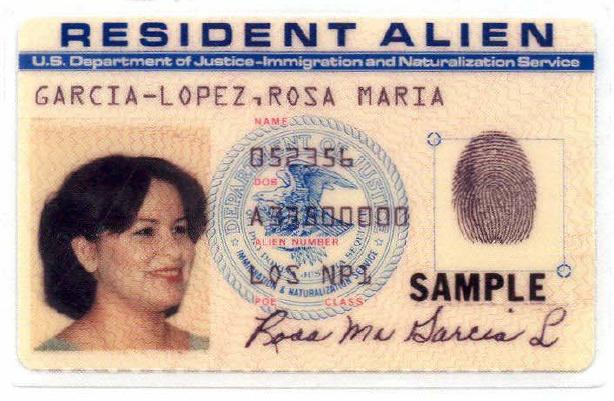 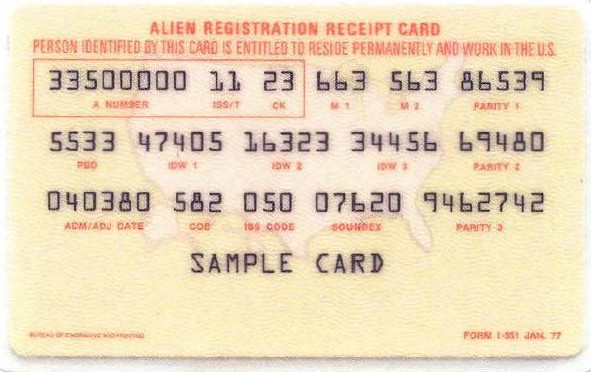 A forgery-proof version of the Green Card was developed in 1977. The newer, machine-verifiable green card was only made at one plant in Texas to improve consistency and quality. The former paper cards have now been made durable like credit cards and driver's licenses. A fingerprint, a signature and an A number have been added as additional identification measures.

The Immigration and Naturalization Service renamed it with the current form number Form I-551 and adopted the new name "Resident Alien Card". Cards issued between 1977 and August 1989 do not have document numbers or expiration dates and are valid indefinitely. 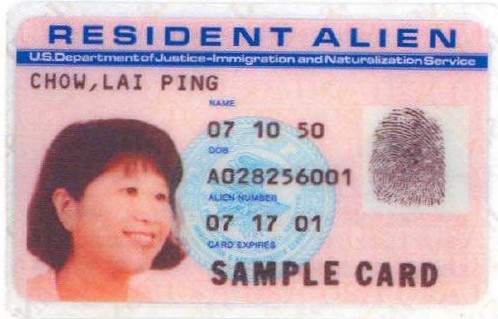 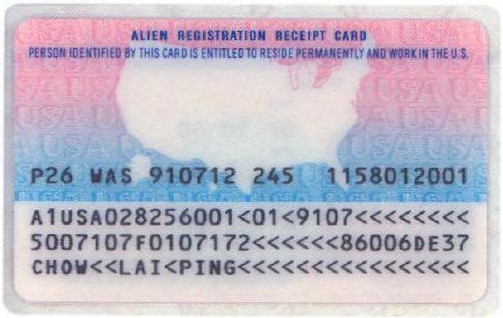 However, employers found it difficult to verify identity due to the different versions of the green card. Therefore INS issued a new map version again in August 1989. These peach colored cards contain expiration dates but have no document numbers and have since expired.

To further combat document fraud, with effect from March 20, 1996, the old green cards of Form I-151 issued before 1979 were overhauled. The Form I-551 Alien Registration Receipt Card became the only valid green card. 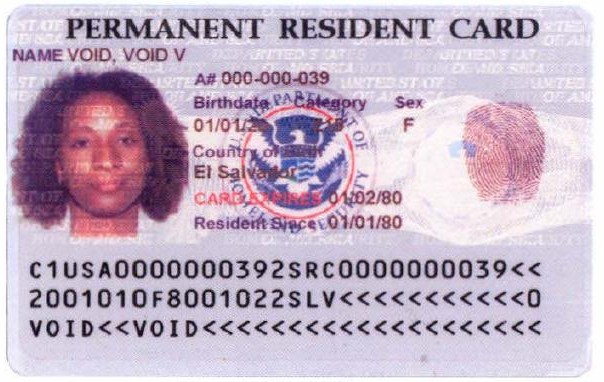 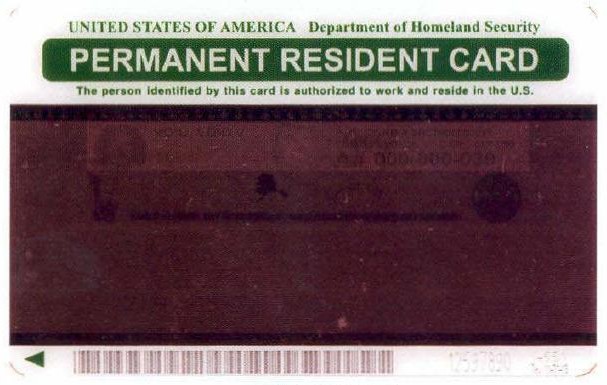 In the history of the green card, fraud has always been a problem. As quickly as INS cracked down on fraud, counterfeiters caught up. Therefore, in December 1997, a more secure card was developed and issued. The revised card was renamed "Permanent Resident Card", but kept the number I-551. A unique document number (also known as a card number) has also been added to the card.

In May 2004, the design was slightly modified with the seal of the Homeland Security Department and a detailed hologram on the front of the card. Large numbers of permanent residents continue to wear this version of the card. The last cards will expire in 2020. 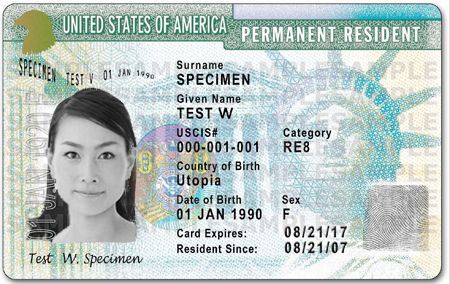 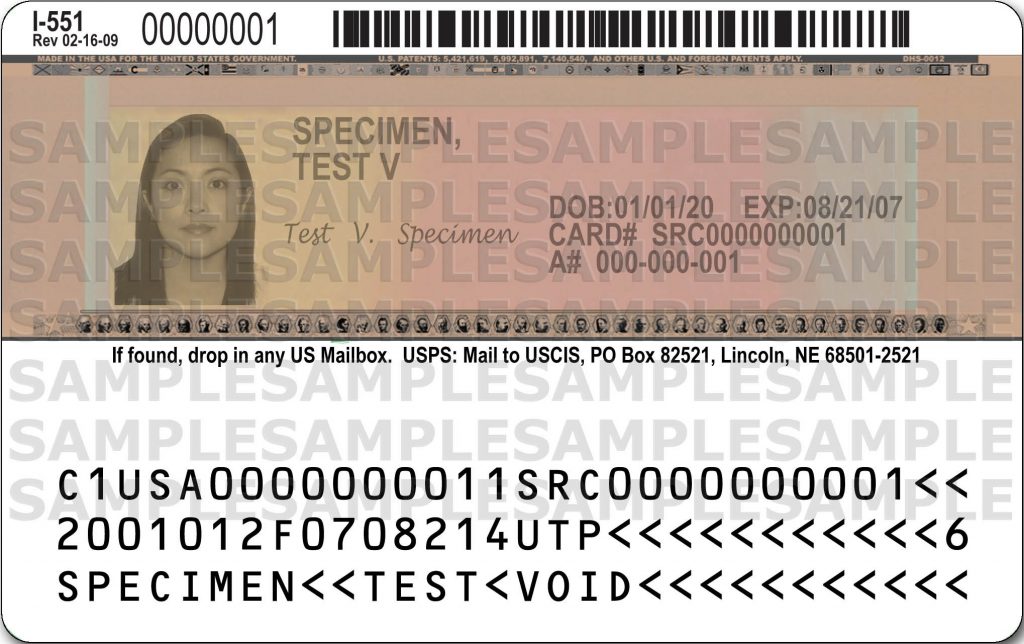 The card turned green again in May 2010 when USCIS released one of the most fraud-resistant versions to date. Since the last of these cards won't expire until 2027, many of these issues are still in the hands of permanent residents. The cards have security technologies such as holographic images, laser-engraved fingerprints, high-resolution micro images and RFID (Radio Frequency Identification).

According to USCIS, "the state-of-the-art technology integrated in the new card prevents counterfeiting, hinders manipulation and enables fast and accurate authentication."

The improvements to this edition reflect the importance of maintaining a valid, unexpired copy of a green card. Identity verification at airports and with employers as part of the I-9 verification process makes the card a vital form of identification for permanent residents of the United States. 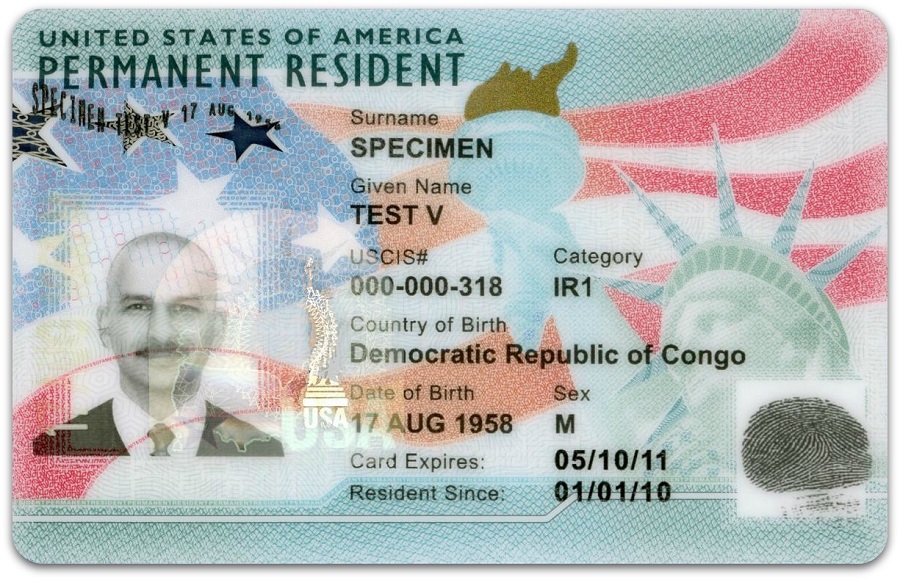 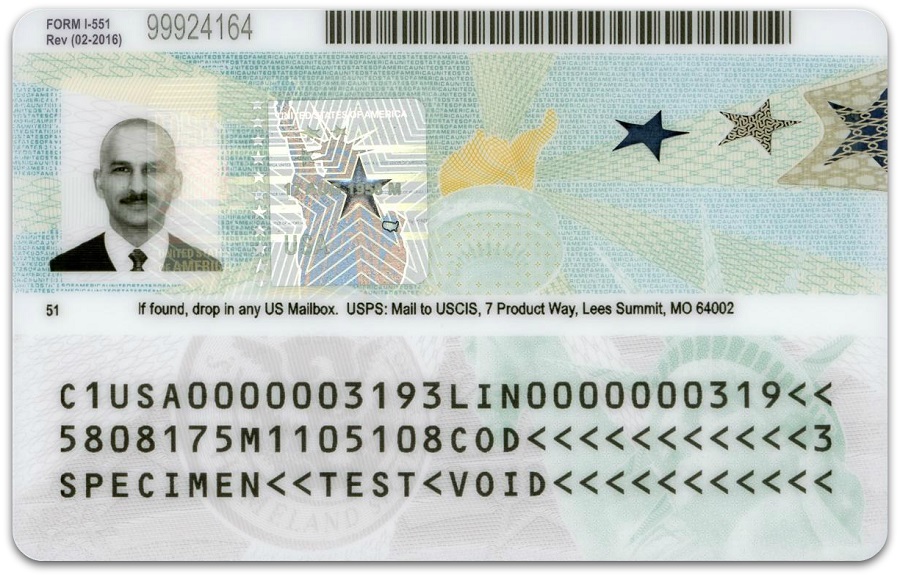 In May 2017, USCIS began issuing a redesigned Green Card as part of the Next Generation Secure Identification Document Project. To prevent fraud, the current edition of the Green Card uses improved graphics and fraud-resistant security features.

USCIS takes a proactive approach and often works with other agencies, such as U.S. Customs and Border Protection, and U.S. Immigration and Customs, to improve document security and prevent forgery. The result is the most secure and tamper-proof identification in the history of the green card.

Previous issues of the card will still be valid for I-9 employment verification, unless they have expired.

RECOMMENDED: How to read a green card

Ielts Science provides a simple, inexpensive, step-by-step guide to USCIS immigration applications. Individuals, lawyers, and nonprofits use the service on their desktop or mobile device to accurately prepare immigration forms and avoid costly delays. Ielts Science allows users to try the service for free and offer a 100% money-back guarantee that USCIS will approve the application or petition. We support Status Adjustment Application (Form I-485), Citizenship Application (Form N-400), Green Card Renewal (Form I-90), and various other USCIS forms.

Notice to reader: This post was originally published on February 15, 2015 and has been changed with improvements.

Canada is aiming for higher immigration rates despite COVID-19

How Important Is to Pass IELTS If You Plan to Study...

These Intl. Tests are Canceled for the 4th Consecutive Month –...

Thank you for subscribing.

The form collects name and email so that we can add you to our newsletter list for project updates.